Acute stroke is a leading cause of death and accounts for a significant morbidity in survivors.  Stroke is becoming more prevalent as a result of the ageing population.1 The importance of stroke is reflected by the associated disability and its place as the 3rd leading cause of death in Western countries.2  Additionally, Acute Stroke can affect patients of all ages and often occurs unexpectedly with sudden life changing consequences to both the patient as well as friends and family.2

Medical Imaging has made rapid advances over the last 40 years, from early Computerised Tomography (CT) scanning in the 1970s3 to specialist diffusion weighted Magnetic Resonance Imaging (MRI) which have been used increasingly in the diagnosis of stroke in recent years.4 5 6

As a result of both advances in technology and widespread availability of new techniques, neuroimaging has become an increasing area of interest for researchers.5 7   Furthermore, the discovery of novel therapeutic interventions such as Thrombolysis with Tissue Plasminogen Activator (TPA), which are optimally used in a selective manner, has lead to an increased interest in the integration of imaging and intervention.8

Practitioners working in acute care medicine and clinicians specialising in the treatment of Stroke are increasingly expected to be able to select and interpret advanced imaging modalities.5  While training in this area has historically been considered sub-specialised, the integration with time dependent treatments such as Thrombolysis means that a general level of knowledge is pertinent.  To this end, various studies have shown mixed results in the interpretation of CT brain by Emergency Physcians.7 9 10  The interpretation of advanced neuroimaging by stroke specialists also appears to be unreliable11 12 but may be improved with the use of algorithms and further training.13

The medical literature looking at the assessment and management of stroke using advanced neuroimaging has developed significantly in the last 15 years.14 15   There has been particular interest in selecting patients for immediate or delayed thrombolysis based on perfusion imaging.7

Many of the recent studies examine the concept of the “ischaemic penumbra” and use this as a guide to therapy.   The Penumbra is defined as “the volume of brain tissue at the periphery of a focal, irreversibly damaged area that is threatened by recruitment into necrosis.”16

There has also been a renewed focus on imaging of patients with a diagnosis of Transient Ischaemic Attack (TIA)17, medical education in the interpretation of imaging18 and attempts to use imaging (mobile CT) in the pre-hospital setting.19

In this review we will discuss some of the commonly used imaging modalities and their role in the assessment of Acute Stroke.  We will focus on the use of these advanced imaging techniques in the context of diagnosis and treatment of patients presenting with symptoms of Stroke and TIA.  The relevance of recent advances will be reviewed in the context of clinical practice in Australian hospitals.

In the last 30 years, Plain CT imaging has become a mainstay of diagnosis of Acute Stroke.2  It has historically been used for differentiation between haemorrhagic and non-haemorrhagic stroke, but it is now being increasingly utilised for immediate diagnosis and selection of patients for Thrombolysis.5

Figure 1 – A Normal CT Head (axial view at the level of the Lateral Ventricles):20

As a result of the information that can be quickly obtained from a Plain CT head, neuroimaging using CT remains the first line modality in Australia and New Zealand for patients presenting with stroke or other major neurological deficits.

CT Perfusion studies have been the subject of increasing interest in recent years.  They have the significant advantage over equivalent MRI scans of being fast to perform and relatively widely available.5

Essentially, CT Perfusion studies aim to identify areas of ischaemic brain tissue that may survive the acute phase of hypoperfusion if an adequate flow of cerebral blood is reestablished.  As we discussed previously on page 4, this area of salvageable brain is known as the “ischaemic penumbra” and is readily identified by this CT technique.16

In general terms the ischaemic brain has a reduction in venous and arterial blood flow.  This can be mapped radiologically by a CT perfusion study.5  The ‘Penumbra’ is identified as the area on the scan that has reduced Blood Flow (CBF) but a normal (or increased) Blood Volume (CBV).  As a result, many perfusion studies show established infarcts and no area of brain that is salvageable, while other scans may show a ‘penumbra’ even after the established therapeutic time window of 4.5 hours.5

Having discussed the benefits of CT perfusion imaging, there are some significant caveats to its use which need to be considered.  The use of CT perfusion imaging requires a higher level of expertise and resources compared with plain CT.  For example, normally patients are selected for perfusion studies in ‘real time’ based on an initial Non Contrast CT head taken immediately prior to the enhanced perfusion scan.  Additionally, acquiring adequate images requires a high level of skill on the part of the CT radiographer.33

The other major issue is that there is a significant risk of subsequent Acute Kidney Injury (AKI) as a result of administration of intravenous (IV) contrast medium.  This risk is higher in patients with chronic renal failure, older age and diabetes mellitus which unfortunately are all more common in stroke patients than the general population.  As a result, patients who are diabetic or have known renal disease should usually not undergo this type of imaging.23

Finally, in my own experience, concerns over patient medical risks may lead to delays in obtaining CTs with IV contrast.  These delays are a disadvantage compared with non-contrast CT head, but could be minimised by rapid point of care blood testing of creatinine, streamlined triage and focused senior review in the ED.

The use of MRI is somewhat limited by lack of widespread availability outside of tertiary care centres and private hospital settings.  However, MRI is widely used in Australia for follow up imaging of patients with TIA and minor strokes as well as selection of treatments in some specialist centres.

Conventional MRI Brain studies may include T1 weighted (fat appears bright and CSF appears dark), T2 weighted (CSF appears bright) and Fluid attenuated inversion recovery (FLAIR) sequences.34  Conventional MRI images provide a reliable way of detecting vasogenic oedema in the subacute phase of stroke, so this type of MRI is most useful 24 hours to several days after an acute event.5   In undifferentiated patients FLAIR sequences are useful for detecting occult haemorrhage as they suppress signal from CSF and, therefore, show up subarachnoid blood easily.  Overall, MRI is slower than CT and provides little advantage in the first 24 hours.23

MRI Diffusion Weighted Imaging (DWI) can be obtained faster than conventional MRI, although like all MRI scans DWI has the disadvantage compared with CT of patient confinement (risk of claustrophobia) and less detail (in terms of thinness of slices).5 34   The DWI technique works on the principle that ischaemic cells have a different ability to handle water homeostasis compared with uninjured cells.  DWI MRI can detect areas of acute ischaemia using a specific system based on the ‘apparent diffusion coefficient’ (ADC) of water.23  The associated subtle changes seen in Acute Stroke usually need to be interpreted by a senior radiologist which may be a disadvantage especially in remote locations and out of hours.  Having said this, telemedicine using internet broadband may make advanced imaging more accessible in the future in Australia.35

In clinical practice DWI MRI increases diagnostic yield when compared with Plain CT (from 50% to >90%).5   This increased yield is illustrated in Figure 5 (below). This technique could be used as an alternative in patients who cannot have a CT perfusion study due to contrast allergy or chronic kidney disease.  Additionally, a 2013 review by Oosteema et al suggested that DWI MRI may provide the ability to risk stratify TIA patients and hence discharge patients low risk patients from the Emergency Department.36   Finally, although the detection rates of infarction on CT and MRI are similar, the diagnostic yield of MRI in terms of identifying a clinically appropriate or clinically relevant lesion, is much higher. In other words, the ability to distinguish between acute and chronic infarction on MRI is important for the treating stroke team as it allows optimum management of the current problem.17 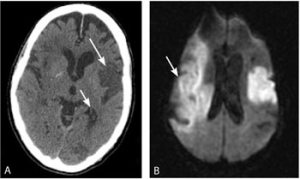 MRI Angiography is often used by specialist neurosurgeons for identifying surgical lesions such as aneurysms, but it may also have some utility in Acute Stroke as it can identify rarer pathologies associated with stroke such as Arterial Venous Malformations (AVM), carotid artery stenosis and major arterial dissections.5 34

MRI Perfusion Weighted Imaging (PWI) provides an alternative to CT perfusion for identifying an Iscahemic Penumbra.  MRI perfusion studies, like CT perfusion, generate accurate mapping of the ischaemic brain and when combined with DWI MRI identifies viable brain around an iscahemic core that may be salvageable with timely intervention.5

Like MRI and CT, Ultrasound (USS) technology has rapidly advanced in the last 20 years. In terms of the assessment of the acute phase of stroke, ultrasound has a number of applications.5

Firstly, Transcranial Doppler Ultrasound was first described in the early 1980s and allows for non-invasive imaging of the Circle of Willis through the temporal bone.23 34 Impressive images can be obtained and the technique can be performed quickly at the bedside even in unstable patients.5  However, this type of USS is technically challenging and does not provide adequate images in around a third of patients.5

Ultrasound enhanced reperfusion therapy is a new approach to facilitate the administration of thrombolysis.39  This technique was shown to improve reperfusion rates (37.2% compared with 17.2%) in a meta-analysis of several small studies.39

The most widespread application of USS in stroke care is in the first 24-72 hours where the use of Echocardiography and Carotid Doppler are considered standard in the Australian Stroke Guidelines (2010).38  These guidelines recommend that USS is used early to identify significant carotid artery stenosis that may be amenable to surgical carotid endarterectomy or an embolic source such as a mural thrombus.

Finally, in addition to the traditional applications discussed above, USS can be used for detection of Deep Vein Thrombosis (common after stroke) and bedside bladder scanning which can detect urinary retention in stroke patients.38

The majority of other imaging techniques for stroke are either restricted to specialist interventional centres, experimental or predominantly used in research.  Limitations on alternative methods of imaging may be due to high costs, inadequate staff training or the length of time required to acquire the images.23

Examples of other techniques include Single photon emission computed tomography (SPECT), Positron emission tomography (PET) and catheter angiography which has been supplanted in recent years by advanced in CT and MRI angiography.5 23

The future of stroke care in Australia is promising given the rapid advances in imaging technology in the last 20 years.  While thrombolysis and stroke unit care have revolutionised the management of Acute Stroke40, integrating these novel treatments with selective investigations is an area of research and quality improvement that could be advanced in future studies.

There are pros and cons to each of the modalities that we have discussed and the choice is often based on existing equipment, local resources, experience of those interpreting the investigations as well as individual choice of specialist stroke clinicians.  Figure 6 (below) outlines an example of an integrated imaging pathway.40

Clinical pathways like these are a helpful way to streamline the quality of care as well as ensure the maximum number of patients have access to timely intervention.39 41

Figure 6 – An Example of an Integrated Imaging Pathway:42

In conclusion, while there are many options for imaging in Acute Stroke, an essential part of improving outcome is judicious selection of appropriate tests.  Furthermore, managing limited resources in a cost effective manner and applying the best evidence available from research to the individual patient at the bedside is important.

One thought on “Imaging in Acute Stroke and TIA”