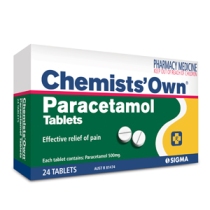 In general the approach described by Australian Toxicologists is as follows: 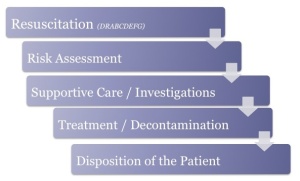 In the Emergency Department the key step in assessment of the stable toxicology patient is Risk Assessment:

In this case the local doctor is concerned about the significant ingestion of a centrally acting calcium channel blocker.

In cardiogenic shock due to toxic ingestion High Dose Insulin Euglycaemia Therapy (HIET) should be considered at an early stage.  This is High-dose insulin with titrated IV glucose (typically patients like Cassie are hyperglycaemic).  HIET is emerging as an effective treatment for severe beta-blocker & calcium channel-blocker poisoning.  Animal data and case reports demonstrate that high-dose insulin (1-10 U/kg/hour) is a superior to standard treatment in terms of safety and survival in both beta-blocker and calcium-channel blocker poisoning.  Calcium channel blockers cause significnat toxicity to L-type Calcium Channels in the myocardium and pancreas.  The HIET provides necessary energy substrate to the stressed myocardium (it is effectively an ionotrope in this regard) and it  corrects the hypoinsulinaemia mediated by the toxicity.  Hypokalaemia is potential adverse effect of HIET and should be monitored for closely. 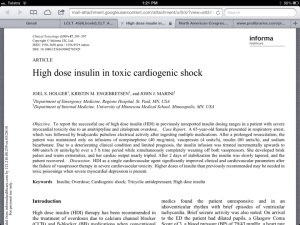 Case Report by the same authors

While the several recent novel toxicological therapies including HIET required further evidence, both animal studies and human case reports demonstrate HIET is superior to standard therapy in beta-blocker and calcium-channel blocker toxicity.  Therefore, HIET should be discussed with the local Toxicologist as possible early intervention in patients with a high risk ingestion.